The council exercises all of the legislative and policymaking powers of the city and consists of five members, one of whom is the mayor. The term of office of the mayor is two years and four years for each council member, except in the case of appointments to fill vacancies.

The council meets in regular session, twice in each calendar month in the Council Chambers of Grand Haven City Hall, 519 Washington Avenue, Grand Haven, MI 49417. Special meetings may be called by the mayor, the city manager, or any two members of council, with at least 18 hours notice. Mayor Catherine M. McNally is a graduate of Michigan State University, where she earned a B.A in History. She holds a law degree from the College of William and Mary in Virginia and is a member of the Michigan Bar. She spent her professional life in the United States Coast Guard, serving 25 years as an officer, attorney, instructor and leader in positions of increasing responsibility in management, law, law enforcement, environmental protection, professional development, government ethics and military justice. She earned an M.A. (with Distinction) in National Security and Strategic Studies from the U.S. Naval War College in Newport, Rhode Island, where she later served as an instructor. She is a certified military judge.

Mayor McNally made Grand Haven her home in 2007 because, she says, it is an architectural gem: open, green, beautifully-scaled, pedestrian-friendly, welcoming and well-kept, offering unmatched access to its incredible waterfront. With a sister and brother, she owns and helps run several local rental properties. She explored coastal Alaska by small boat and trail in her three favorite Coast Guard tours, played a mean first base on softball teams all over the country, and relishes cutthroat family pinochle games. She is a member of St. Patrick-St. Anthony Catholic Church and Grand Haven’s American Legion Post #28, and lives in a small Victorian on Franklin Avenue. She ran for local office hoping to help preserve the City’s beauty and small-town character. Mayor Pro Tem Ryan Cummins was elected to office on November 5, 2019. Prior to being elected to office, he served on the Planning Commission for four years and Zoning Board of Appeals for two years. He currently serves on the board of the Northwest Ottawa Recreational Authority and is a member of the Muskegon Social Justice Commission.

Ryan grew up in Muskegon, but moved to Grand Haven in 2014. He has a Bachelor of Arts Degree in Criminal Justice from Michigan State University. He has a great amount of experience at the local, county and state levels of government. His previous state government experience includes over six years as a child welfare specialist and manager for the State of Michigan. For the last ten years he has also worked seasonally as a Marine Deputy for the Ottawa County Sheriff’s Office. He was a previous municipal event planner and currently works full time as the Community Coordinator for the Muskegon Police Department.

Ryan enjoys anything on or by the water. This includes boating, kayaking, hiking, exploring new places and learning new things. Councilmember Michael Fritz was elected to office in 2003. He was born in Grand Haven and has been a life-long resident. His interests and hobbies include baseball and classic and street rod automobiles, which he turned into an auto repair business with his brother in 1982. He and his wife, Janice, have three children, Patrick, Amanda and Michelle. 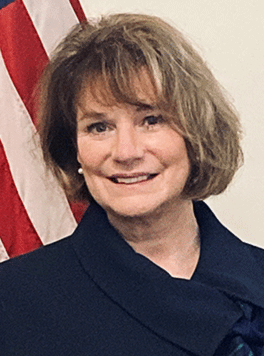 Councilmember Karen Lowe was elected to office on November 2, 2021. She holds a Masters in Business Administration degree from Washington University in St. Louis and a Bachelors of Science degree in Nursing from the University of lllinois. Recently retired, Karen brings over 25 years of consulting and management experience in business strategy, process improvement and technology implementation as both a former Partner at PricewaterhouseCoopers (PwC) and as a retired vice president and general manager with IBM. Prior to her election to City Council, Karen served as commissioner on the city’s Historic Conservation District Commission and, as an amateur historian, published her first book on one of our city’s historic districts in 2019. Karen can be reached by phone at 616-843-6765. Councilmember Kevin McLaughlin was elected to office on November 2, 2021. Prior to being elected to office, he spent over 40 years as an administrator in community development, economic development, and in the private sector. Kevin has specialized experience within city planning and development, comprehensive proficiency in real estate financing and development, commercial and industrial retention and attraction, financial credit analysis, and budgeting and policy development. Prior to his role on Council, Kevin has served as the Chairman of the Planning Commission, a member of the Zoning Board of Appeals and participated as a member of the Beyond the Pier Master Plan Study as well as the Grand Haven Infrastructure committee.

While living in Binghamton, NY, Kevin and Liz frequently visited Grand Haven on vacation and quickly fell in love with the community. Upon retirement, they made the move to Grand Haven, and have been active voices within the community since. Outside of his work in local government, Kevin enjoys golf, gardening, traveling and relaxing on the beach.